After the horse and cart, the first mechanical invention was the bicycle and its magical pedal, chain and gear system. It remains the most efficient human movement machine ever invented. Nothing else has occurred to the human mind that can move so much weight, so quickly with so little energy. A bicycle is a kind of a miracle machine, but it was a miracle that was soon displaced, after 1896, by the internal combustion engine. That was much less efficient, very expensive to build and maintain but it had one enormous advantage. It tapped into the largest supply of stored energy that the planet contains, the seas of oil left from the carboniferous age – millions and millions of years of decayed organic matter. The bicycle tapped into nothing more than two human legs and the food required to fuel them. There was no contest. Oil won. 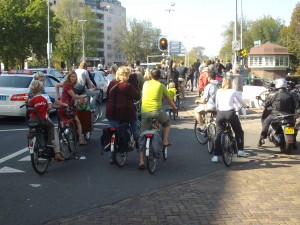 I’m sitting in a café writing this on an Amsterdam street. It is busy. The bicycles flood up and down it like cars do on the busiest streets back home. There is no relief. I keep thinking the crowds of cycles will slow or reduce but they don’t. There are scarcely any cars at all. Cycles are the dominant culture. I can’t get over the variety of cyclists and their casual competence from the littlest child to the a silver haired adult. A child goes by sitting backwards on his mother’s bike, eating an ice cream with one hand, holding onto a cord attached to a suitcase on wheels with the other, all the time chatting away with his Mum. I almost rub my eyes.

It’s a different world. No one wears a helmet. The cyclists dress no differently than pedestrians or car drivers. There is none of the acres of special biker equipment that you see at home. The bikes are set up differently, so people sit very erect, almost straight up and down so they can see easily without any neck or back strain. Neither men and women have cross bars on their bikes so they can dismount and stop in literally the space of one human stride with just a quick forward flick of the knee. Their agility in traffic is nothing short of stunning. 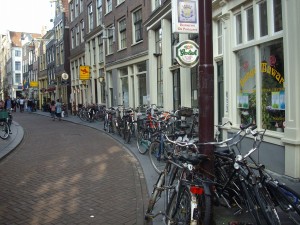 There are lots of very talented cyclists in Canada, but very few are born on a bike and travel on one every day for every purpose, shopping, entertainment, work, visiting friends. In Amsterdam this is more common than grass. A mother passes me with two little boys sitting in a box on her front wheel, the little boys are sitting with their legs draped over the sides of the box, sunning because the day is warm and pleasant. The bike police would put the mother in jail if she tried this in a Canadian city.

I can’t decide what is hardest to adapt to and conclude that it is the density. The first day in Amsterdam Patty is hit by a motorized scooter which are also allowed in the bike lanes. She doesn’t realize the lane is two way and doesn’t look to her left. There is an explosion as the scooter piles into her and she is on the ground, holding her side, the scooter and driver are also down. The traffic moves around the bodies. The man on the motorized bicycle isn’t hurt and he immediately calls the police and the emergency response team on his cell phone. Within minutes, the police and paramedics arrive. Patty is bruised and scraped but appears to be okay. I am obliged to pay the scooter driver 50 euros for damage to his scooter which has the brake on one side twisted and the plastic housing broken. Lesson number one do not step into a bicycle lane in Amsterdam.

Stendhal described a shock he felt when he travelled in Italy of seeing too many beautiful things and being forced to retire to his hotel room to compose himself. It’s now called ‘Stendhal’s Disease’ and many travellers get it and do the same thing, retire from the fray of sight-seeing. I have another travel disease it’s called ‘Amsterdam shock’. 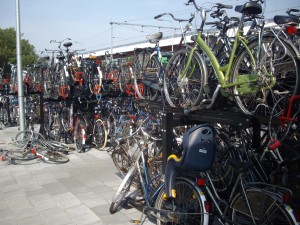 It is now the 4th day that we’ve been in Amsterdam and Patty, being the trooper she is, is back on her bike, but I still can’t get over it. I keep thinking if I close my eyes the scene will change. The floods of cyclists on the street will diminish. Cars will emerge from the shadows and replace them. The five story bicycle parking lots will become five story car lots, but no, it doesn’t happen. Cyclists and trams are the dominant culture in Amsterdam and have been since their invention, now more than a century ago. The automobile never ran the bicycle out of town.

Fortunately, I visited Berlin before moving on to Amsterdam and it gave me a chance to adapt. Berlin was a surprise in many ways. It’s more than sixty years since the Second War ended but you can still see the effects everywhere. Some of the museums have just recently been repaired. Nonetheless I found the city to be youthful and inspiring in many different ways. Not the least of which was fifty per cent of Berlin households do not own cars and you can certainly see this on the streets where cars and bicycles are about equal.

Berlin has a North American feel to it. The streets are wide. The city sprawls across the landscape. There’s plenty of open spaces. It doesn’t feel crowded. It’s a young city. You can imagine it is how Ottawa or Toronto might look if they invested in bicycle lanes on all the major streets and beefed up their transit. Berlin pleasantly surprised me but it did not overwhelm me. Amsterdam did.

This entry was posted in Uncategorized. Bookmark the permalink.