Griffons and Lions on Guard 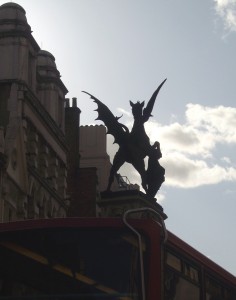 All of the roads into the City of London (the central core of the much larger metropolis) are protected by a rampant griffon. We tend to hear more about the congestion charges than we do rampant griffons, but they have a much older history than the charges. The griffons are there for more important reasons – to keep evil out of the city and they have been doing this job for more than 3,000 years.

The Hittites, in their mountain stronghold of Hattusha (as did the Assyrians, the Phrygians, the Babylonians), had great blocks of stone on each side of their gates with rampant, ferocious animals to keep evil out and impress visitors. Sometimes the animals were mythical, sphinx-like, half animal – half human forms, but lions and winged griffons were also used. 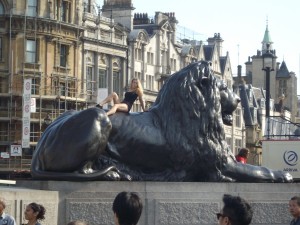 In London, when the griffons are not at work, the lion is preferred. You can find lions guarding the entrance of private homes as well as on public duty. The bronze lions at Trafalgar Square, keeping watch at the foot of Lord Nelson’s column are so impressive that visitors from the world over feel obliged to sit between their paws or climb onto their backs and have a picture taken. The lions are patient, polished and golden in the sun and don’t seem to mind at all. I have been told they approve of the congestion charges because they have reduced automobile traffic, the air is cleaner and their shiny coats less damaged, but that’s just what I hear, I don’t have the information first hand.

London hasn’t got 3,000 years of history but it’s got a couple of thousand. You can still find parts of the Roman wall that originally surrounded the city. There’s a Norman ‘keep’ at the Tower of London; a reconstructed version of Shakespeare’s Globe theatre a few meters from where it originally stood, the house where Samuel Johnson, creator of the first English dictionary lived, and the apartment block and neighbourhood where T.S. Eliot measured out his life out in tea spoons. The pub where Charlie Chaplin used to like to drink after performing still stands as does another where Vera Lynne used to drop in for a pint. 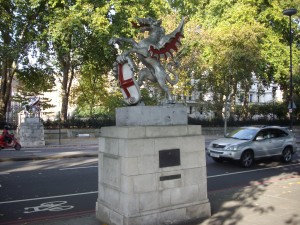 This is the city of my mother’s young life. She grew up in Hammersmith, just a block off the Broadway and her Dad’s pub is still there, as is the fish market although both have gone considerably upscale. She wouldn’t recognize the Lyric Theatre. It’s now no longer a Victorian stone building, it’s over a shopping centre with a rooftop garden but is more dynamic than ever.

Hammersmith has had its ups and downs over the years. It was a quiet, modest, middle class place in my mother’s youth and suffered a good deal after the Second War with traffic and highway construction. ‘A Clockwork Orange’, that paen to the pointless of existence, was filmed in Hammersmith and it was a good location choice. Fifty years ago, the High Street had all the charm of parking lot under an expressway. It had been dismembered by thoughtless, corrosive post war development.

But the Griffons have been at work here and Hammersmith is back. The old bus turnaround has been surrounded by a large and not unpleasing, commercial and residential development. The pedestrian underpasses have been torn up and replaced with street surface crossing. St. Paul’s my mother’s old parish church has a major renovation and extension underway. It looks happy and I’m pleased to say Hammersmith looks happy. Good work Griffons!

Click on photos to enlarge. Use browser back button to return. This works in all posts.

This entry was posted in Uncategorized. Bookmark the permalink.

One Response to Griffons and Lions on Guard