String Theory, the City of Bath and the Romans

String Theory  proposes that more than one set of physical laws are possible and as a consequence different universes exist and can co-exist, a little like J.K. Rowling’s idea where Harry Potter can pass through a portal and enter a world where a different reality (magic) exists. It’s not a new idea among science fiction writers but it is for physicists sweating over equations. 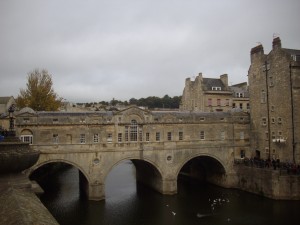 Europe certainly has a shadow reality that is present everywhere you travel from Turkey to Britain. It’s not as difficult to understand as string theory but the extent and complexity of it is often hard to get your mind around. Right now, I’m in Bath, U.K. The entire city has been designated as a UNESCO World Heritage Site and it’s easy to understand why, the completeness and perfection of its’ Georgian architecture is really quite astonishing. The entire city is a magnificent Jane Austen set.

This is the city Austen wrote two of her books and you can still walk down the same streets Jane did, have lunch at the Pump Room as she did and stroll by her houses, for over the years the family lived in several places. But it’s not Jane Austen or Georgian architecture that I’m thinking about as Europe’s shadow world. In the 1880s, when the city was doing some sewer work, they accidently struck ‘gold’, the lead lining for a massive Roman holding tank. 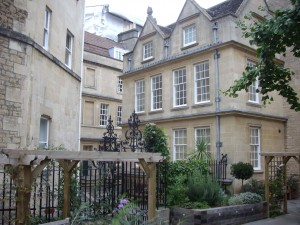 Years of archaeological research followed and gradually defined a massive Roman temple, bathing and administrative area. Most of this complex is under present day Bath and completely inaccessible, but the archaeologists were able to reveal the ‘great bath’ (the largest Roman pool) because it was directly under the modern pool where it was simply a process of peeling back the King and Queen’s pool to expose the Roman one beneath.

The picture we have of the Roman world is a very primitive one formed mostly by Hollywood films like Gladiator and Ben Hur where the centre of attraction are their most violent games. It’s a like trying to understand modern society though films about football or hockey. These things are real, but limited. Travelling through Turkey and Europe, you gradually begin to get an idea of is just how extensive and complete the Roman civilization was because everywhere you travel, every city you see, every Chateau you explore has beneath it or beside it or a couple of kilometres down the road, the Roman equivalent…and often it’s just as large and complete. 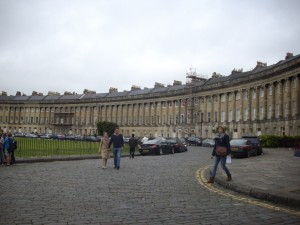 Twelve thousand ‘wishing’ coins were found in the pool at Bath from all over the Roman world. In the third century, Bath was an international centre as well, visited as it is today and while there weren’t visitors from Japan, Anatolia is not next door. In the Chateau countryside, throughout France, the Romans were there with ‘villa-chateaux’, great sprawling homes with in-floor heating, gracious gardens, magnificent frescos and floor mosaics and of course vineyards.

The more archaeological research that is done across Europe, the more the size and the extent of the Roman civilization is revealed until it is now beginning to be clear that there is almost no place the Roman civilization didn’t create urban and rural landscapes very similar in purpose to the ones we have and see today.

If there was a mountain in the Pyrenees that modern industry has mined for iron ore, the Romans did also. If there were a group of villages that produced industrial levels of pottery, the Romans had industrial kilns in the same place also. If you are travelling on a modern divided highway, the chances are it is not far from an older, Roman one which is smaller but just as straight. If a modern city has cisterns, the Romans had cisterns also as the city of Istanbul has discovered. 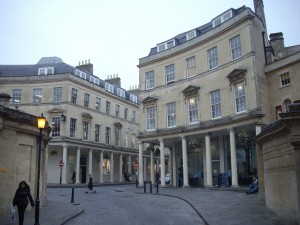 I have gazed out at the sea from the tranquil remains of the great Roman spa on the island of Cos where Hippocratus once taught and in the north run hot water from the spring at Bath across my face; seen great, silent cities like Ephesus with nothing left but magnificent bones. And it slowly becomes clear long before the modern European union, and millennia before North America was urbanized, there was a global civilization of cities. A world where cities and culture, trade routes and industry, politics and people prospered as they do today.

Yet all of this urban accomplishment literally sank into the earth and the thought cannot escape that while the coterminous multiple worlds of ‘string theory’ are difficult to imagine, sequential ones are not, because it has already happened.

Click on photos to enlarge. Use browser back button to return. This works in all posts.

This entry was posted in Cities. Bookmark the permalink.

One Response to String Theory, the City of Bath and the Romans