I had thought my days of giving  speeches on Parliament Hill were over and was surprised to find myself up there speaking.  I had this notion that I had had enough of politics and wanted to fade quietly into books and teaching.  I can’t say I was happy to be back on Parliament Hill at all. 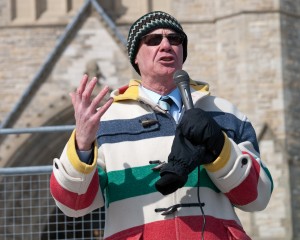 The problem is this Robocall election fraud is so offensive, so dangerous to all that  I consider Canadian that it seems as if I had no choice.  My father fought in the second war to preserve and protect  fair elections and democratic values.  Many young men and women have been killed and injured in Afghanistan  to protect and preserve  free and fair elections at home and abroad, the equality of men and women, freedom of speech – the core values of what makes Canada, Canada.

I don’t agree with Elizabeth May and other politicians who think that  the whole matter is best dealt with through a public inquiry.   Public inquiries take years.  (How many decades did it take to connect Mr. Mulroney to the airbus bribes?)  Nor should anyone need a public inquiry to understand that the last election was a fraud and the present government is illegitimate.   I was asked by someone holding a camera afterwards – what about the Conservative who won by 15,000  votes?  Is his election a fraud?

I was astonished by the simple mindedness of the question.  By this calculus, it is okay to try and defraud the public as long as you don’t succeed, but  if you succeed in defrauding the public of a fair election as appears to be the case in ridings decided by a few dozen or a few hundred votes, then it’s not okay?  The answer is clear.  It’s wrong in either case.  Principles are no longer principles if they’re negotiable on a success scale.

The other thing that is now crystal clear is, it wasn’t a question of a couple of ridings here and there.  It was a massive attack on the Canadian electoral system.  Elections Canada is reporting 31,000 letters of complaint.  There were only about 6.5 thousand votes in total separating the winners from the losers in the 14  closest ridings.   31,000  complaints on one side of the scales, 6.5 thousand votes on the other.

In city politics we always considered that for every person who took the time to write one letter of complaint about an issue, there were  another 10 constituents who felt the same way, but couldn’t find the time to write.  Using this math, that’s 310,000 people across Canada who was affected by the Robocalls telling them their poll was closed.  I don’t need an enquiry to tell me that this invalidated the last election.  Nor that the only corrective measure possible is by-elections in all of the ridings affected.

This entry was posted in Politics. Bookmark the permalink.

3 Responses to Speaking on Parliament Hill about Election Fraud