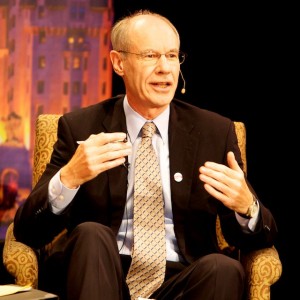 A career on the front lines of the city.

Clive Doucet is a passionate urbanist. His life is all about cities: how they work; what people need from them; and how to make them better.  He was one of the original author’s of the “Federal Urban Domain”, the federal government’s first document to classify all of its urban lands.  His last book “Urban Meltdown: Cities, Climate Change and Politics as Usual” was short listed for the prestigious Shaughnessy/Cohen award for political writing.

As an Ottawa city councillor Clive was the leading advocate of a city-wide light rail system and co-founder of Ottawa’s O-Train.  He brought to city council a strong voice for creating a more sustainable city.  As a Mayoral candidate in 2010, his campaign was focused on sustainability and reducing city costs.  Presently, the capital is growing its roads twice as fast as its population.  Taxes can’t be controlled if road costs continue to increase at twice the rate as the population that pays for them.  He used examples like the extension of Terry Fox Drive, 45 million for 4.5 kilometres of new road and Alta Vista Expressway 55 million for 1.7 kilometers of new road as how not to manage a city successfully.

In 2010 Councillor Doucet won the Ottawa Consumers Choice Award for man of the year and in 2004 he received the Canadian Eco-Councillor of the Year award.

Clive’s influence reaches well beyond Ottawa. He is a much sought after speaker on urban affairs. In 2009 he spoke in Philadelphia at the Re-Imagining Cities: Urban Design After the Age of Oil conference sponsored by the University of Pennsylvania and Rockefeller Foundation.  This was a half century conference celebrating the conference that first brought together Lewis Mumford, Jane Jacobs and others.

In 2008 he was a Killiam lecturer at Dalhousie University, Halifax. In recent years he has also spoken on urban issues in Vancouver, Toronto, Montreal and Hamilton.]

His book Urban Meltdown:Cities, Climate Change and Politics as Usual is used in universities across North America.  Urban Meltdown was endorsed by former Toronto Mayor David Miller, the late Jane Jacobs, James Howard Kunstler and others.

Clive meets with professionals in cities whenever he travels. Recently in Chicago he had the pleasure of making the acquaintance of  Edward Uhlir,  Designer and director the world famous Millennium Park. A successful revitalization project turning rail yards into a waterfront public park.

Clive is not only an asset to Ottawa. He is an ambassador for the city to the world. 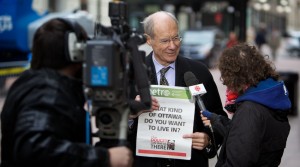 Clive entered politics in 1997 to combat the expansion of neighbourhood streets in arterial roads.  He championed the Ottawa O-Train pilot project instead of widening Bronson Ave. It won the Federation of Canadian Municipalities sustainable transportation award and its successor, the Siemens project, a national procurement award.

In 2002 he worked with former councillor Phil McNeely to create the financial plan for the Hay West campaign, which sent 30,000 tonnes of hay to the drought stricken western provinces.

Early years on the front lines.

As a student, Clive lived on Spadina  Ave. in Toronto and was active in the successful opposition to the Spadina Expressway.   He holds an honours B.A. in anthropology from the University of Toronto and an MSc in Urban Anthropology from Universite de Montreal.  At the Federal Ministry of Urban Affairs (MSUA) he was Manager of Communications, in the Demonstration Group, who were responsible for the restoration of the Vieux Port area in Montréal, (1978/79) where he organized the first of its now famous summer street festivals.

He also worked for the Ontario Department of  Treasury, Economics and Intergovernmental Affairs (TEIGA) as the Eastern Ontario Policy Advisor on local government reform and with the Federation of Citizens’ Associations in Ottawa coordinating participation of local community groups in the development of Ottawa-Carleton’s first Regional Plan.

Clive has written plays, novels, poetry and many commentary pieces for newspapers and magazines.  Three of his most successful books are “Notes from Exile” chosen by McClelland and Stewart as one of their 100 best books to celebrate their first 100 years of publishing; “My Grandfather’s Cape Breton” selected by the New Brunswick Board of Education for the provinces school system and “Urban Meltdown: Cities, Climate Change and Politics as Usual”.

He is married with two children and three grandchildren. When not working, he can often be found cycling in the Gatineau Hills, or rowing on the Rideau Canal.  He still competes in the old guys rowing category in head of river regattas.

18 Responses to About Clive